A TRIBUTE TO TATA ALFRED GUBULA, THE DOYEN OF COMMUNITY STRUGGLES IN UPINGTON AND NORTHERN CAPE.

RIP Tata Alfred Gubula. At the height of the harassment and repression unleashed by the apartheid security establishment in the mid 1980’s to early 1990’s he was a fearless and committed leader of the community of Upington and the Northern Cape Region (before the current 1994 demarcation). He led with distinction and courage without expecting any personal reward, even up to his last day. 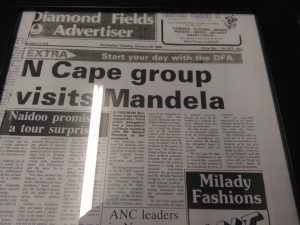 Of course he was involved in struggle decades much earlier than that. He was one of the father figures and leaders that we the younger generation looked up to for guidance. Together with veterans like Molehe John Mampe, Jim Summers, Dorothy Peters, Mrs Mtyobile (all late), Mrs Flatela, Mrs Khasu (Vryburg), Rev Aubrey Beukes (late) and Mrs Nogwili (both from Upington) they, and many others, played a crucial role of leadership when it was not comfortable or even safe to do so during the dark years of violent repression.

Tata Gubula led from the front. He led the Paballelo township (Upington) community uprisings in the mid 1980’s and through the successive state of emergencies and was detained without trial numerous times. He led community struggles to defeat the apartheid Bantu Councils to replace them with the present democratic and non racial local government.

He worked tirelessly to save the “Upington 26” which was later reduced to the “Upington 14”. He worked with human rights lawyers like the late Advocate Anton Lobowski and others to save the comrades who faced the apartheid hangman. He was a leader of the “Save the Patriots Campaign” which was a national campaign to save all comrades on death row throughout the country. He was also leader of the United Democratic Front (UDF) in the Northern Cape Region.

Before the release of Nelson Mandela, Tata Gubula and Rre Molehe Mampe led the Northern Cape Regional delegation in January 1990 to Victor Vester Prison as part of the national consultation at the invitation of Madiba. It was indeed an honour and recognition of his leadership qualities to be invited by the then jailed Madiba and endorsed by then exiled ANC leadership in Lusaka. He and the delegation got a unique insight into the background and nature of the negotiations that were to unfold which led to the present constitution, which is said to be one the best in the world.

After the unbanning of the ANC, he led the difficult tasks to rebuild it’s structures in the province and became one of the first key leaders elected to serve in the then Regional Executive Committee (now PEC). He led with the likes of Ruth Mompati, Mieta Seperepere, George Mokgoro and Manne Dipico.

Tata Gubula was always a gentleman. I can remember the great moments we shared (even though we were young) and I would visit him most of the time I visited Upington on duty and he would have the same friendly and welcoming embrace I came to know since I met him for the first time in 1985.

When In 2008 COPE was formed he was present because he felt that the liberation movement had lost the political plot and was no longer what it was during his historical experience. Sadly, he was not honoured and was politically isolated even despite many comrades who knew his lifelong contribution. Even in that situation he had the humility and grace to accept what he could not change and always stayed hopeful and positive. He probably knew that history could never be rewritten and that the community knows full well that he was a rock to lean on and a community leader when it mattered most. His work to build a democratic constitutional order is here and is being enjoyed by the nation.

However, the last time I visited him towards the end of 2017 he told me that the current Premier, comrade Sylvia Lucas, did pay him a visit a month earlier and they had a great political discussion about politics and issues in general. He told me that she made a commitment to correct the political injustice by doing certain things (which I am not in liberty to speak about in public), which I was pleased to hear and shared with other struggle stalwarts. I have no doubt that she will follow through on the commitment towards the family and to honour Tata Gubula’s struggle legacy.

He ran the race for a better South Africa and has seen the fruits of his hard work.

MAY HIS BEAUTIFUL SOUL REST IN ETERNAL PEACE!!