It has been mission accomplished at the annual International Travel and Tourism Student & Teacher Conference and lessons have been learned about tourism’s evolution. Tourism learners and teachers from 15 countries descended on the European elite tourist French city of Nice where research presentations were exchanged.

South Africa’s representatives at this global stage were learners Amy-Lee Visagie and Chrislin Dekoker who were accompanied by their teacher Christo Fieland from the Northern Cape’s Carnarvon High School. With the theme being based on Innovation in Tourism, the trio got to present this country’s case study on community benefits from tourism offshoots of Carnarvon’s Square Kilometre Array (SKA) and Sutherland’s Southern African Large Telescope (SALT) which are astrology research based.

“It was my first time flying, a bit nerve wrecking when the plane first took off from Kimberley, it was like oh I am going into the air and I wanted to cry but it was an amazing experience and at conference we learned a great deal and met many people,” enthused Visagie who wants to reach for the stars as a travel writer.

“Breathtaking” is how the aspirant airhostess in Dekoker described her impression of Nice and sightseeing around Monaco; “I cannot wait going into the field working as an airhostess. The trip gave me a lot of background and I am really happy about it.”

The French city’s allure and that of Monaco were put to the test when this writer’s question on the beauty comparison between it and their hometown backyard was met with prolonged giggles and an unexpected response.

“Nice is the place known for its love, riches and it is beautiful. It takes your breath away,” said Dekoker with Visagie chipping in with; “And also Monaco is known to be the place where the rich people live, the James Bond movie was made at the casino in Monaco.”

But then motherland got a double thumbs up in the food stakes. “I cannot wait to get home, I miss South African food” added Dekoker with Visagie nodding and mumbling in agreement.

In having gone easy on the teenagers over the serious business of conference, noting that they had endured a long-haul flight, the tougher question was put to their teacher Fieland.

“The audience was blown away that South Africa has something called astro-tourism. Some countries are packed with pollution hence they cannot practice it. Our presentation was also well received for having been packaged with sound effects of the stars and the music and the way the learners presented their facts.” Having encouraged the two learners to enter this school based tourism competition, Fieland will have another go at it next year; “I will try to participate again with my new grade-11 class.”

At the Kimberley airport to welcome the trio home was Education MEC Martha Bartlett who congratulated the learners for having represented South Africa, the Northern Cape and their town of Carnarvon. She also expressed praised for their achievement in having passed their grade-11 and heading into the Matric Class of 2019. “Good luck and have a blessed Christmas and a wonderful new year to you and a your teacher and thank for having represented us so well.”

The trio participated in a competition run by the National Global Travel & Tourism Partnership South Africa (GTTPSA), a global body that has unleashed a voyage into creating tourism awareness amongst the youth of its 15 member countries. 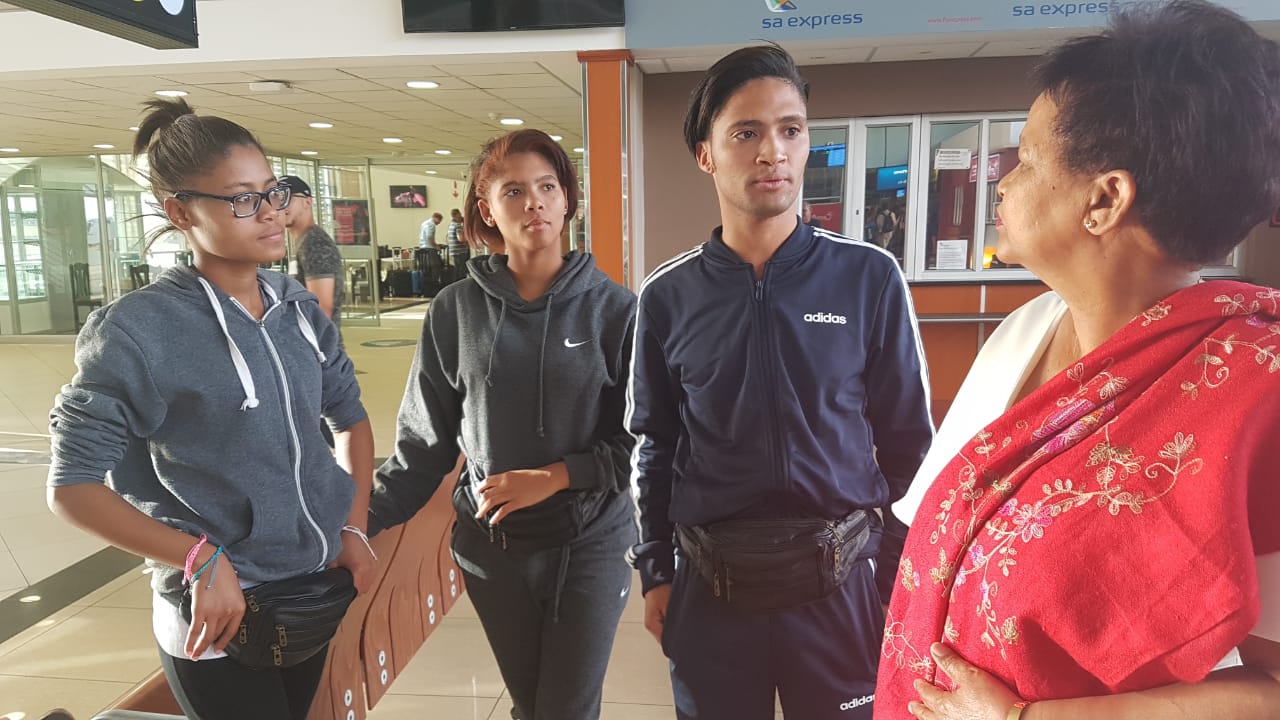