FROM VOLUNTARY LEAVE TO SUSPENSION FOR GOOLAM & LYDIA

The ANC in the Northern Cape has called on the Sol Plaatje Municipality to suspend its municipal manager Goolam Akharwaray and chief financial officer Lydia Mahloko. The move follows Kimberley being gripped by its worst scenes of public violence that resulted in 193 people being arrested on charges ranging from public violence, business robbery and malicious damage to property last week Thursday and Friday.

The ANC’s provincial secretary Deshi Ngxanga addressed the media after a meeting with community leaders that have been at the forefront of the protest action.

A multi-stakeholder committee has been agreed upon. Certain measures such as the suspension of the two officials, the uplifting of the interdict against community representatives as instituted by the municipality, assist in getting those arrested released and addressing all grievances through the multi-stakeholder engagements have been endorsed.

“The ANC apologises to all businesses that were affected during the violent protests and find it regrettable that municipal as well as private property was destroyed. The violent protest and the looting has in the main affected the working class and the poor which is regrettable,” added Ngxanga.

With the situation tense around the Galeshewe Magistrate’s Court, a large number of the arrested persons appeared before court and were granted free bail and others R2000 in some instances of remanded cases.

Tumelo Mosikare, a representative of the community told NCNN.LIVE that they are content that their demands are being addressed.

The situation outside the Galeshewe court remains volatile.

Meanwhile, the provincial department of education indicated that it shall keep assessing the situation with schools reopening tomorrow and pleading to educators, parents and learners to use own discretion.

“We appeal to the public to ensure that schooling commence as normal, as per the 2018 school calender and to afford learners and educators the right to education. We are entering a crucial term, especially for our matriculants, as they prepare for their final examinations,” said spokesperson Geoffrey van der Merwe. 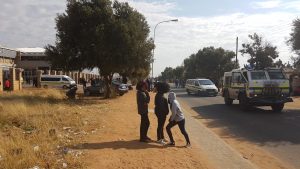 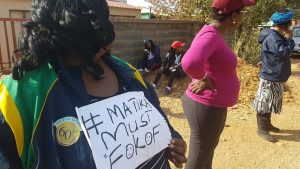 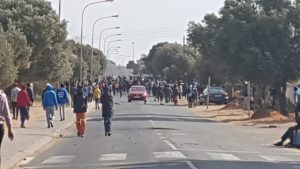 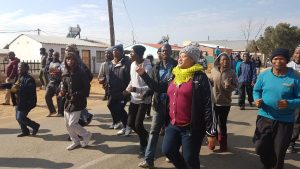 Pictured are the Crowds outside the Galeshewe Court

No Loadshedding For Galeshewe As It Takes By-Election…