Kimberley – The fourth instalment of the community empowerment initiative aimed at empowering the boy-child and focused on the growth of the previously disenfranchised – the Galeshewe Gentlemen’s Dinner (GGD) – is set to enjoy greater success this year.

This December’s Sunday 15 at the Northern Cape Theatre will  be of no theatrics but an occasion marking the humility and generosity in businesses and individuals coming out in support of a worthy cause.

The goals engendered in the GGD brand mirrors a legacy from which its initiator exudes characteristics of generational entrepreneurship from which profit making is invested into societal good. It is a case of like father like son for entrepreneur Pule Tau as he keeps his GGD mission on a growth path.

“What we deem different at this year’s dinner is; for the first time ever the dinner will be embraced by the Premier and the Executive Mayor of Sol Plaatje Municipality which spells out government’s stance in enhancing the social prowess of the community.

“For the first time ever we will be having 30 of our target market – young boys aged 14 to 16 years – that forms the Lekgotla la Dinaledi initiative derived from the concept of the GGD, attending the dinner to witness milestones achieved by the gentlemen from the same community they from. This would serve to inspire them and show what is expected of them when they grow up,” asserts Tau.

There is more of a community builder in Tau with his sharp focus on uplifting those that will come after him and paving a networking platform for other entrepreneurs, professionals and what he has dubbed to be like-minded persons fixated on the idea of harnessing the growth of the historically marginalised.

“I am optimistic that the fourth instalment of the dinner will afford us with an opportunity to network towards a greater Black society, and most importantly live a life that is pro-supporting and growing one another for the betterment of Galeshewe,” enthuses Tau about his valiant task.

The effervescent Tau’s late father Ephraim who was affectionately known as Bra Zom, drew multitudes of teenagers off the streets during the late 1980s and 1990s.

The transitioned Bra Zom was not only one of the pioneers of the township economy before the dawn of democracy but would also give motivational talks on the stoep of his Shantytown household from where his youth-only football team Athletic United was birthed. In being a seller of fresh produce and varied businessman enterprises, the elder Tau compassionately ensured that players and supporters were fed.

It clearly runs in the family. The Lekgotla la Dinaledi which Tau tends to stage in a workshop form, equally draws hordes of boys seeking role models and eager to equip themselves with information that would turn them into agents of change and avoid them being perpetrators of a string of current day societal ills and crimes.

“The GGD marries well with the Lekgotla la Dinaledi Project, as it is from the GGD that we link these young boys with mentors in the field of study, sports career or business. Through the GGD, mentors are able to hold the mentees by the hand until these boys are young adults.

“We hope that these young men will equally volunteer their time to those younger than them one day when they are successful,” affirms Tau, a father to two girls.

He has proven that he is not myopically in the business jungle for own survival but appreciating the living years by walking in the footsteps of Bra Zom whom he and siblings have shared with other kids as a role model.

The Galeshewe Gentlemen’s Dinner seeks to:

We are steadfast in in cultivating a culture of embracing and celebrating one another’s milestones. Through this act we will be marketing these inspirational gentlemen to our main target market the – Black Boy Child – so that they emulate these gentlemen.

More especially in that there is a lack of Positive Role Models within our township of Kgosi Galeshewe.

We are in the fourth year of hosting the Galeshewe Gentlemen’s Dinner, we can only be appreciative of the support the support we have received thus far in enabling us to push this noble community building initiative. We are however looking forward to unlock additional support from the community, private sector, businesses and the government in carrying out the set objectives of this programme with aplomb.

Expansion of the Initiative

Furthermore; with the required additional support we envisage to receive, the plan is to make this initiative a provincial event – where all men across the Northern Cape Province can be celebrated. We believe through this project our ailing social fibre would be remedied.

This year’s dinner is held under the theme: “Embracing and Supporting One Another Fuels Upliftment.”

The objective of the Galeshewe Gentlemen’s Dinner is to:

The GGD is a collection of initiatives that are aimed at contributing positively to the growth and development of Ga-Kgosi Galeshewe both in terms of individual human capital development and collectively. Hence it is also aimed at: 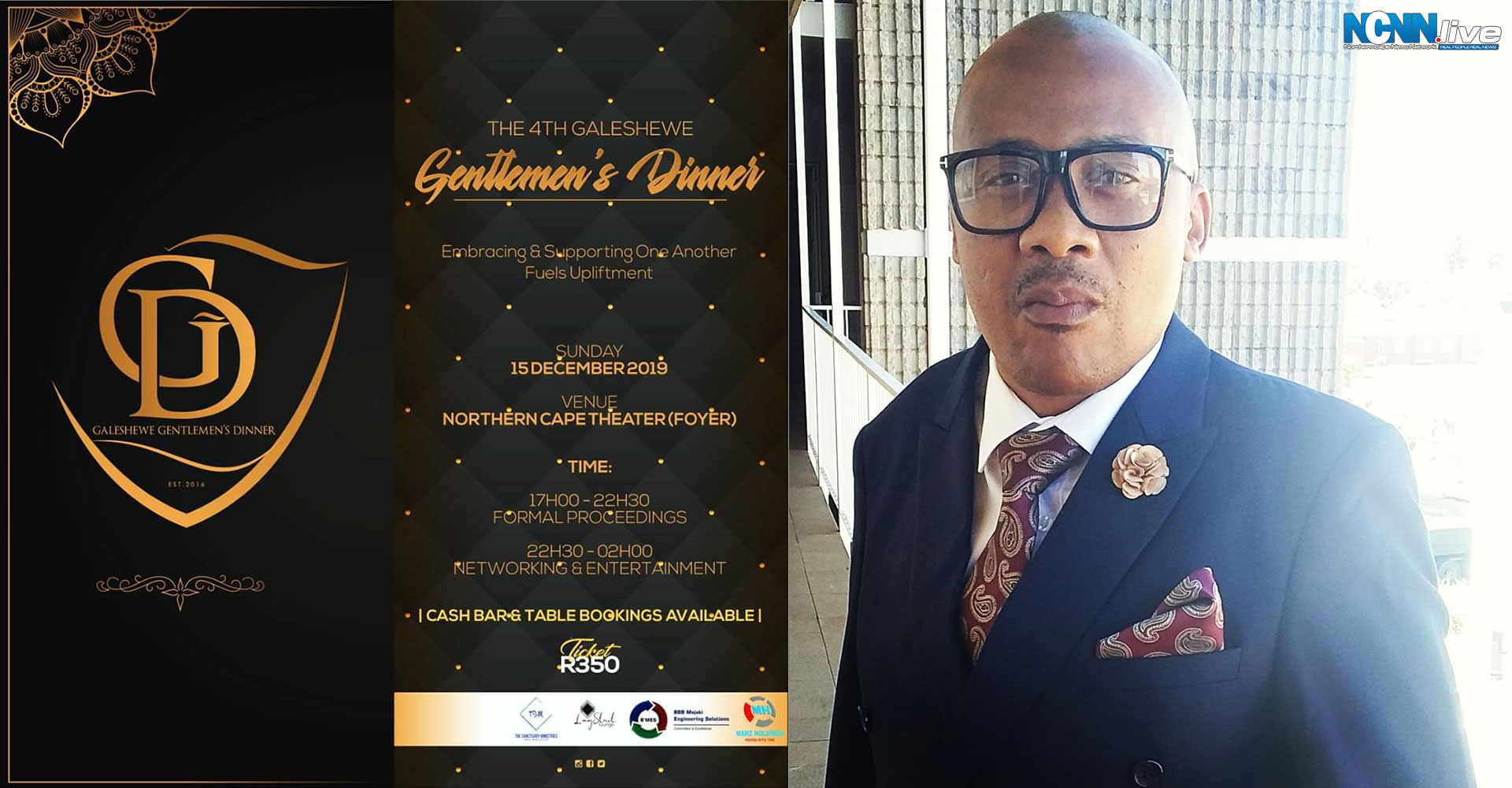 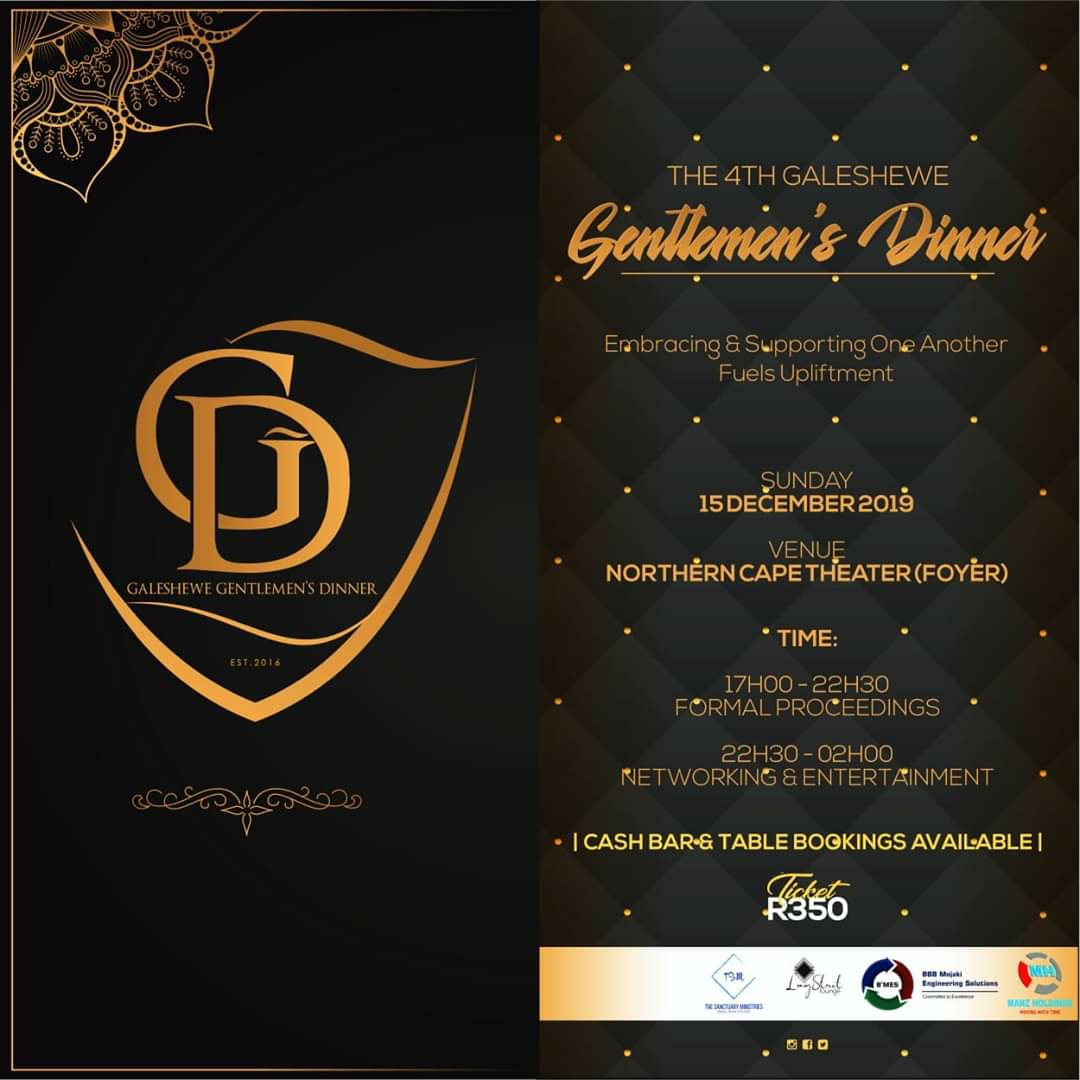